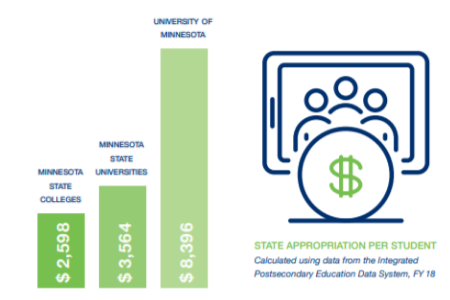 This past year LeadMN continued working to highlight the vast funding inequities that community and technical colleges in Minnesota face, calling on the Governor and Board of Trustees to work towards addressing this disparity. Minnesota’s community and technical colleges serve more first generation students, students of color, student parents, adult learners, and other non-traditional student groups. Our colleges alone serve more students of color than the University of Minnesota, Minnesota State universities, and private universities combined. These are students that often require more support to be successful, but the colleges they attend are the ones receiving the least support.

Over the past year, LeadMN has continued its work on improving the transfer of credits across our colleges and universities. At the State Legislature we introduced legislation (SF4415) to expand transfer pathways to include Associate of Applied Science (AAS) degree programs. While many AAS programs have similar four-year degree programs, there are no established transfer pathways to ensure students are not forced to take unnecessary credits, using up precious grants and scholarships, and extending their time to graduation.

“I was told because I’m going into an AAS degree, which is the only degree my school offers in accounting, I’m expected to lose half of my credits when I transfer to a Minnesota state university to pursue a four year degree in accounting. I’m going to graduate in May with 64 credits and roughly 32 of them will transfer. This is not a situation any college student should ever be in.”
-Student at Lake Superior College Student

In January 2020, LeadMN released the Transfer Outlook report, detailing the history behind transfer pathways, the development and implementation of the project, and providing recommendations for policy makers. The transfer pathways project was originally mandated by the State Legislature in 2014 and 2015 due to the advocacy efforts of LeadMN students who pushed to improve the unnecessary complexity of the transfer system.

Federal Advocacy in Response to the Pandemic

Along with working to improve FAFSA completions, LeadMN increased its federal advocacy efforts in response to Covid-19 and other changes impacting community and technical college students. In March LeadMN sent a letter to Congressional leaders urging them to include emergency grants for students and a freeze on student loan payments, provisions which were both included in the CARES Act a short time later.

“At this critical moment in the Covid-19 National Emergency, these types of support are needed to ensure our students and graduates can weather the ever-growing economic and social impacts of the pandemic. With the increasing restrictions on business, social interactions, and institutions of education in Minnesota and throughout the country, students will soon be facing crisis, and those who were struggling before this pandemic began, will be hit the hardest.”

Is there ever a bad time to raise tuition? During testimony to the Board of Trustees in May, LeadMN President Oballa posed this question to Trustees and challenged them to prove they could freeze tuition without a legislative mandate to do so. With the economic impact of the pandemic placing major burdens on community and technical colleges students, and over one-third of students seeing a loss of employment or reduction in working hours, further tuition increases would only make college more unaffordable for those struggling the most and likely result in even larger enrollment declines.

Thanks to the work of student leaders, The Board of Trustees approved a tuition freeze for the fall 2020 semester and a three percent increase for spring 2021. This “shared pain compromise” was the first time the Board of Trustees has ever frozen tuition without a legislative requirement to do so.

-A student at Ridgewater Campus