Students faced numerous barriers to voting during the 2020 election. The pandemic caused many colleges and universities in Minnesota to move online, making it more difficult for students to register to vote and cast their ballot. Yet, thanks to the work of colleges and universities, students were prepared to overcome these barriers and voted in record-setting numbers during the 2020 election.

According to the National Study of Learning, Voting and Engagement published by the Institute for Democracy & Higher Education at Tufts University, the student voting rate reached 70%, which was an 8-point increase in student voter turnout in Minnesota from the 2016 election. That was higher than the overall voting increase in Minnesota of 5 points. In fact, Minnesota students voted at a higher rate than the general electorate of 30 states, according to data released by the United State Election Project. Minnesota students beat the US voting rate average by a full ten points, busting the myth that they are apathetic about elections.

According to data released by the Center for Information Research on Civic Learning and Engagement, Minnesota had the second highest youth voter turnout in the country. After leading the nation in 2018, Minnesota gave up the top spot to New Jersey after they implemented a pandemic-related election reform to automatically send out mail-in ballots to every voter. That simple reform increased youth voter turnout by 22 points, which was the largest voting rate increase of any state in the country. Minnesota and New Jersey's high youth turnout reflects the impact of strong election laws on youth voter turnout. When barriers are reduced for first time voters, turnout is higher. Minnesota has long been a national leader in voter participation because of its same day registration rule, and New Jersey’s recent change to automatically send ballots tore down some of the historical barriers that students face when voting.

The other key to Minnesota’s high voting rate among students is because Minnesota colleges and universities are adopting a “growing voters” mindset that seeks to make voting habit-forming in young people through a long-term approach of increasing civic education, creating civic agency, and tearing down institutional barriers that prevent students from voting.

This report will examine the voting rates of Minnesota’s community colleges, state universities and private universities for the past four elections. This data will help us understand the current state of youth voting and identify areas for improvement if Minnesota is going to continue to lead the country in student voter participation.

This report contains the voter registration and voting rates of the student body of each campus in the 2014, 2016, 2018, and 2020 elections. Data was pulled from the National Study of Learning, Voting and Engagement (NSLVE) state cluster and campus reports. The NLSVE reports compare enrollment records from the National Student Clearinghouse and the voter files gathered by Catalist, a national data service firm. The team at NSLVE then estimates the number of non-resident aliens according to the Integrated Postsecondary Education Data System (IPEDS) data. The data does not exclude the number of resident aliens and undocumented students, potentially causing some campuses to have a voting rate lower than what is reported.

The Students Learn Students Vote Coalition promotes civic learning and engagement on campuses across the country by providing a series of key steps and information on best practices that institutions can use to create a more voter-friendly campus.

Another message of thanks to the team at the All In Challenge for Campus Democracy, who supported the retrieval of campus reports from across the state and assisted with data cleaning and consolidation.

We appreciate the support of the Minneapolis Foundation for supporting LeadMN Growing Voters Project in 2020. Without their generous financial support, we could not have done this work to build civic agency with students across Minnesota. 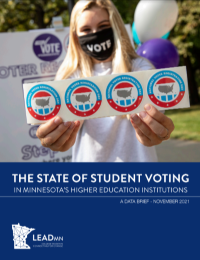