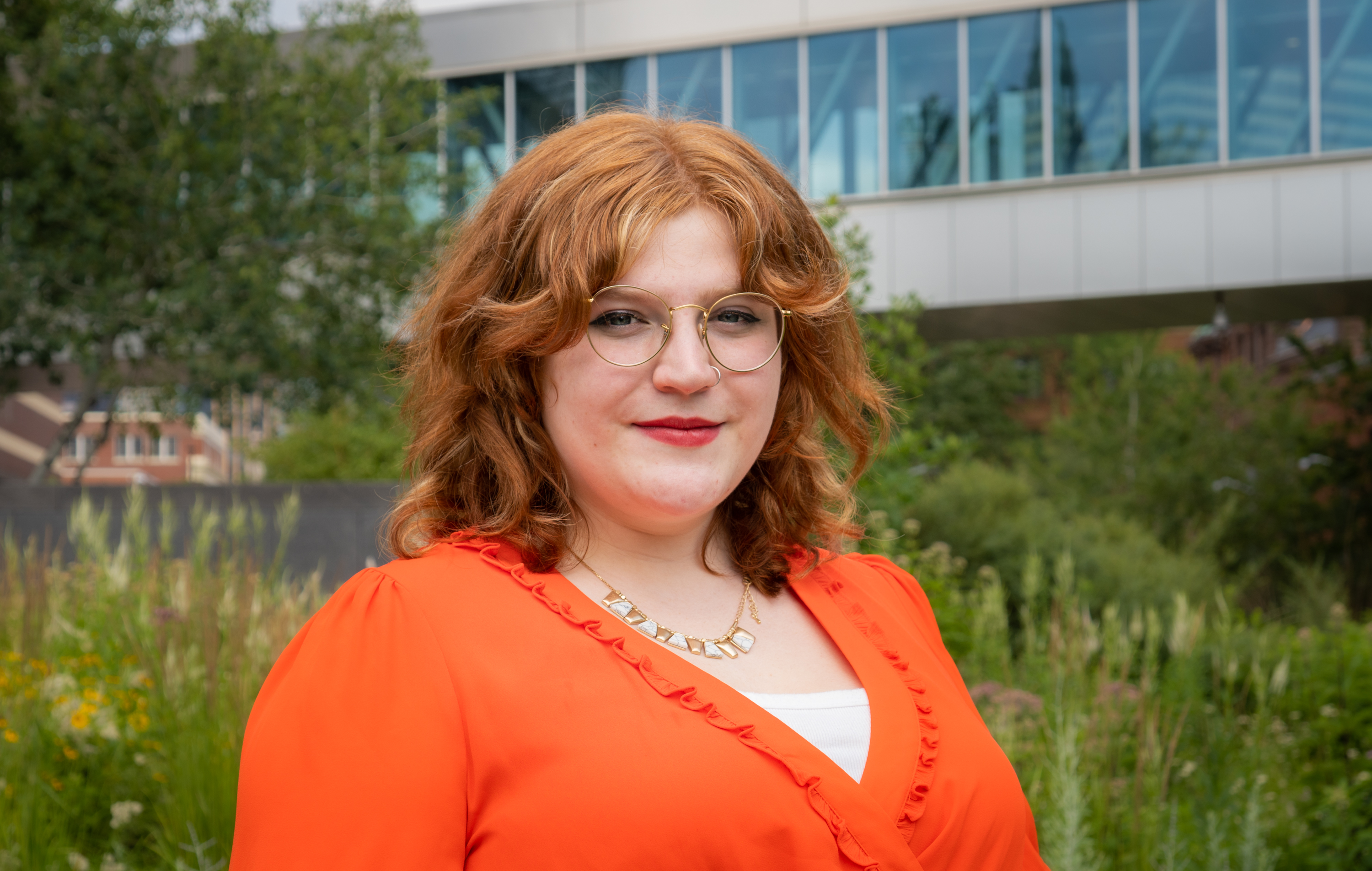 Henri Mingo is a student leader at Minneapolis College.

Henri Mingo has lived in Minneapolis her whole life. She is studying graphic design and hopes to translate her passion for creative design into marketing and communications in the music industry or a corporate setting.

Henri wasn’t always certain they would go to college. After significant struggles with mental health in high school, they nearly failed to obtain a diploma and had essentially written off the idea of going to college. But when they were given the opportunity to complete high school alongside taking a few classes at Minneapolis College, they realized that they weren’t ready to give up just yet.

“Minneapolis College took a chance on me and admitted me on academic probation. That first semester, I was able to prove myself - not just to the college, but to myself. I felt like I wasn’t really sure if I could do it. I felt incapable. I wondered if I just wasn’t the kind of person who went to college. I started off really slow, and I was able to build the confidence that made me feel like I could handle full time classes. I’m so glad that Minneapolis College gave me the opportunity and the chance to prove I could do it. To prove to myself that I could do it.”

Because of her involvement with the student senate, Henri has become involved with LeadMN, too. She has enjoyed her time with LeadMN because it has provided connections with other students in a time when isolation has been so prevalent. She’s found meaning in advocating for other students and sharing experiences with peers in different parts of the state.

“I decided that student life would be a really great way to get that connection, and I’ve always been someone who was passionate about storytelling and sharing experiences and advocating for people’s needs. I’m a helper. It seemed like a good fit for me - to get connected by helping others.” 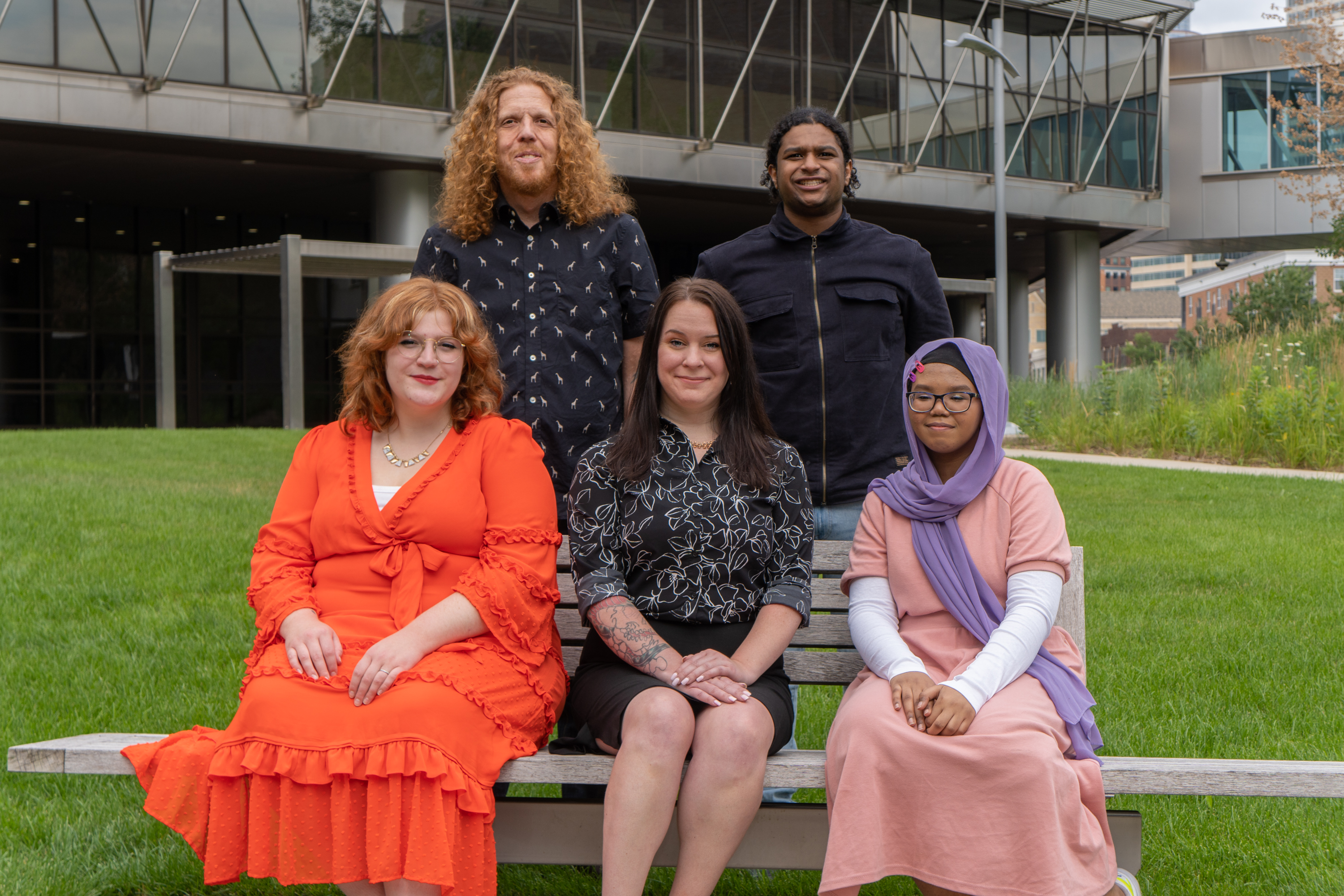 Henri poses beside members of the Minneapolis College student senate.

Still, college hasn’t been easy. There have been many barriers that Henri has faced on the pathway to obtaining their degree.

An ongoing struggle with mental health is one of those barriers.

“Mental health is a real barrier. I’ve spoken with the ARC here before, and they expressed to me that depression and anxiety is not something they provide classroom accommodations for. I kind of gave up on that pursuit when they told me that - I felt I would have to fight tooth and nail for every bit of support I could get, and that was the last thing I wanted to do with everything else on my plate - to fight for understanding and accessibility. I feel like I have to keep going, even if my mental state makes it hard. There have been times where I’ve been in a near-constant state of panic, frozen in place with anxiety or depression for hours in between my homework. It’s a quality of life thing for me, I’m not willing to sacrifice my schooling, so I sacrifice other areas of my own well-being.” - Henri Mingo

Being unhoused is another. Henri went between staying in hotels and crashing with friends for months. They also lost access to their computer and stable internet, which greatly impacted their ability to complete classes as they were offered entirely online at the time. They worried about being forced to drop courses because of their inability to log into class or come to campus.

“I was homeless from May until September of this past year, staying at friends’ houses on a roll-out futon. That was really hard for me, because there wasn’t a lot of stability. I was very concerned I was going to be dropped from school due to life circumstances because I had no place to call home.” - Henri Mingo

Henri mentioned that the college has many resources for students facing these types of issues, but sometimes accessing those resources can be a barrier in its own right.

“They have computer labs and internet here at the college, that are useful if you’re in the area or have transportation. Yes, there are buses and they sell bus cards, but how do you get here to buy that bus card with no transportation? Or if you buy it online, how do they mail it to you if you’re homeless and don’t have a consistent address to list?”

Fortunately, Henri is not unhoused anymore. But the high cost of college, alongside rent and other basic living expenses, are still great burdens. Many colleges are trying to give out funds when they can to make it easier for students to pay for school. However, these resources often require proof in order to access them, which is sometimes inaccessible to students already facing significant financial and personal stressors.

“There were difficulties I experienced with accessing grants, especially those that make you prove your need.. I mean, what kind of documentation can I give them that says I was jumping from house to house? Especially when I hadn’t been receiving mail or bills I could show them since I didn’t have a home address until recently. There’s nothing I can show for that. And then there’s this anxiety that if I send it without some kind of proof, they’ll deny me.” 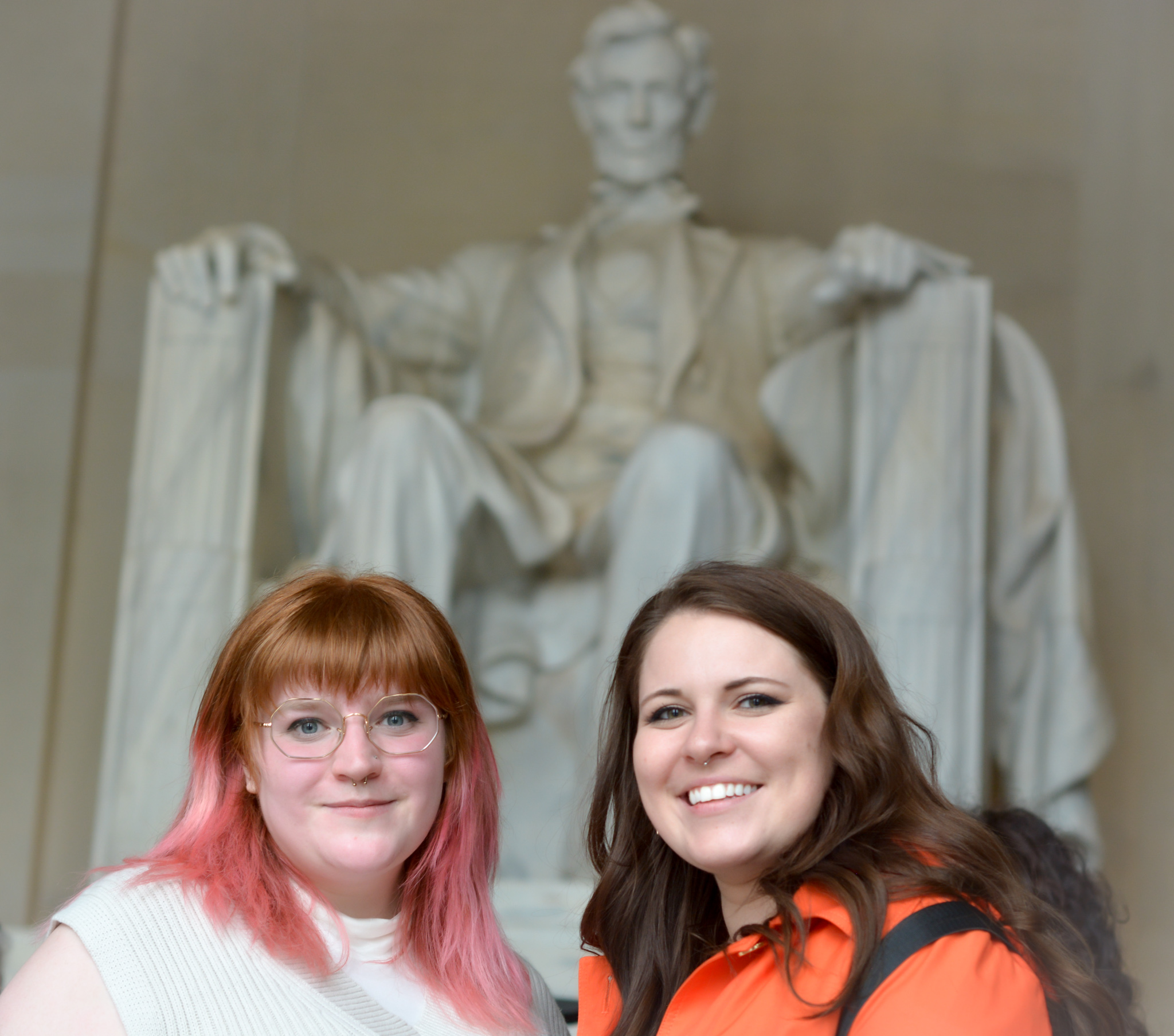 Henri traveled to the nation's capital to advocate for fellow students at LeadMN's annual D.C. Summit.

“I’m a Pell Grant student, and that support has been amazing. Then they also had the emergency grant you could apply for, up to $2000. I had just gotten out of homelessness and had this apartment and I didn’t even have a garbage can, just a trash bag on the ground. I had all these things that I needed help buying. I’m grateful I am no longer jumping from place to place, but there’s a lot of necessities coming out of homelessness that are more expensive than you might realize. I didn’t realize garbage cans are like $80. So I went to apply for the emergency grant and they asked for proof. At this time, I also had a number of other bills that I hadn’t realized I owed since I wasn’t getting mail due to having no home address. I was hoping to use this grant for these necessities and bills, and I was trying to gather all the proof they needed - but by the time I had done so, they had already given out all the money. So that was a resource I tried to access but couldn’t because of barriers my recent homelessness presented. Not to mention the time it took to gather this evidence that I felt I had spent in vain. I absolutely needed a garbage can and other household basics - I mean, maybe not absolutely - but I think it’s easy to downplay my needs. Yes, I could keep the garbage bag just sitting on the floor, but there are things that could make life a little better and make me feel more…worthy. I know it’s seemingly little stuff, but those things really stick in your mind and take up time worrying that could be used for studying, or just being a student and enjoying student life.” - Henri Mingo

Despite these challenges, Henri will graduate in spring 2023 with an Associate’s of Applied Science in graphic design, digital, and print media and a certificate in web design, front end development. She’s looking to work for a company looking for a resident designer, ideally in the music, entertainment, or events industry.