The State of Student Voting

In the 2018 election, young people (age 18-29) could be the voting block to decide key swing races for Governor, US Senate, and US House. According to research by the Center for Information & Research on Civic Learning & Engagement (CIRCLE) at Tufts University, “Young people are poised to have an extraordinary impact at every level in Minnesota, which also ranks 2nd in our Senate YESI and has four districts in our Congressional YESI Top 10.”

There are two key factors in why young people’s impact is so high in Minnesota. The first is that a relatively high percentage of Minnesota’s population, 7%, is attending college. Second, the rate at which young people vote is much higher in Minnesota than across the country in the midterm election, with 27.8% of college students voting. Youth voting in Minnesota will not only have a short-term impact on the upcoming election, but will likely impact future voting rates for the state of Minnesota.

We know that voting is habit forming and that when young people learn about the voting process and participate now, they are much more likely to do so throughout their life. It is clear that encouraging college students to vote now is critical to the future of our democracy.

This report will examine the voting rates of Minnesota’s community colleges, state universities and private universities for the past three elections.  This data will help us understand the current state of youth voting and identify areas of improvement if Minnesota is going to continue to lead the country in voting participation. 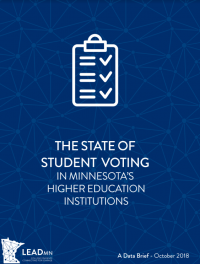