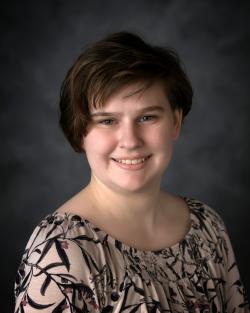 Britta Sather grew up in the Fargo/Moorhead area throughout her whole life. Raised by a single mother with her older brother, she was not sure if college would be a possibility after high school, but with the love and support from family, she made it happen.

Britta chose to try out student government her first semester at Minnesota State Community and Technical College - Moorhead. Not knowing what will happen next, she chose to try everything once. Going to the Fall General Assembly may have been hard due to illness, but she found the fire to keep going - to keep fighting to help students around Minnesota. This past year, she was honored to be the chair of the steering committee, where the fire and new experiences led Britta to run for Treasurer to fight for mental health, debt-free college, and so much more.

In her free time, she likes to write and watch anime. Britta considers herself a "concert-aholic" having gone to many concerts int he past year with a few more planned. In May she will graduate with her AAS in Human Resources.