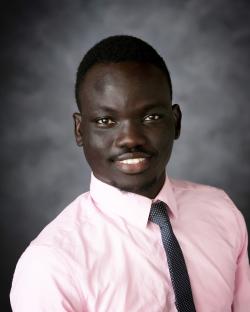 Oballa Oballa was born in Gambella, Ethiopia and grew up in a Kenyan Refugee Camp. He moved to America in December 2013, searching for a better education and a better life. Oballa served as SGA President at Boxelder Job Corps in South Dakota before attending college. Currently, Oballa is attending Riverland Community College in Austin, MN where he graduated in 2019 with Associate of Arts and Associate degree in Human Service. He is also pursuing a bachelor's degree in social work through Riverland and College of St. Scholastica.

At Riverland, Oballa was the former Student Senate Public Relations Coordinator and Student Senate President. He was also the former LeadMN Southeast Platform Representative. Oballa's work doesn't stop on campus - he works at Mayo Clinic Health System in Albert Lea, MN in the psychiatric unit. He is also involved in his community as a member of the Austin Human Rights Commission.

Oballa is extremely passionate about food insecurity at our two-year colleges and wants to make sure that all of our campuses can provide a food pantry for students who are struggling. Oballa and his Riverland Student Senate created a food pantry on their campus, which has been a great resource for their students.

Outside of work, Oballa loves road trips and cooking. He also likes doing stand up comedy when he is in the mood to entertain people.