As we wrap up this school year, here is a look back at some of LeadMN's amazing victories all due to our student leaders endless hard work and dedication.

Educating student voters across the state of Minnesota 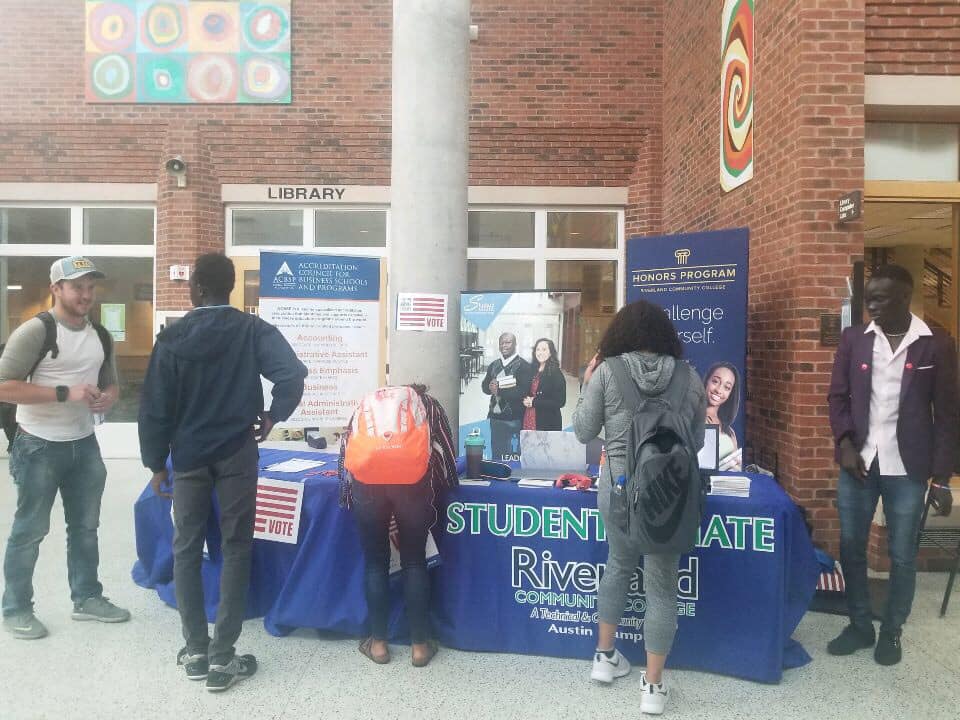 One of LeadMN’s core focuses as an organization is fostering a culture of civic engagement among students. For the midterm elections this year, LeadMN students began GOTV as early as August in order to get their peers prepared to vote. LeadMN hosted its first ever Democracy in Action Shark Tank event, where teams of students, faculty, and administration from each campus competed to develop their own GOTV Action Plan and receive funding to execute it. On National Voter Registration Day, LeadMN staff and students took to campuses and visited over 400 classrooms, speaking with thousands of students, in an effort to register students to vote and answer questions about the how and when to vote. LeadMN registered 2,140 students to vote on National Voter Registration Day alone, ending as one of the leaders in voter registration both state and nationwide! Our student leaders ended up registering over 3,000 of their peers to vote overall, and another 15,000 students pledged that they would vote. 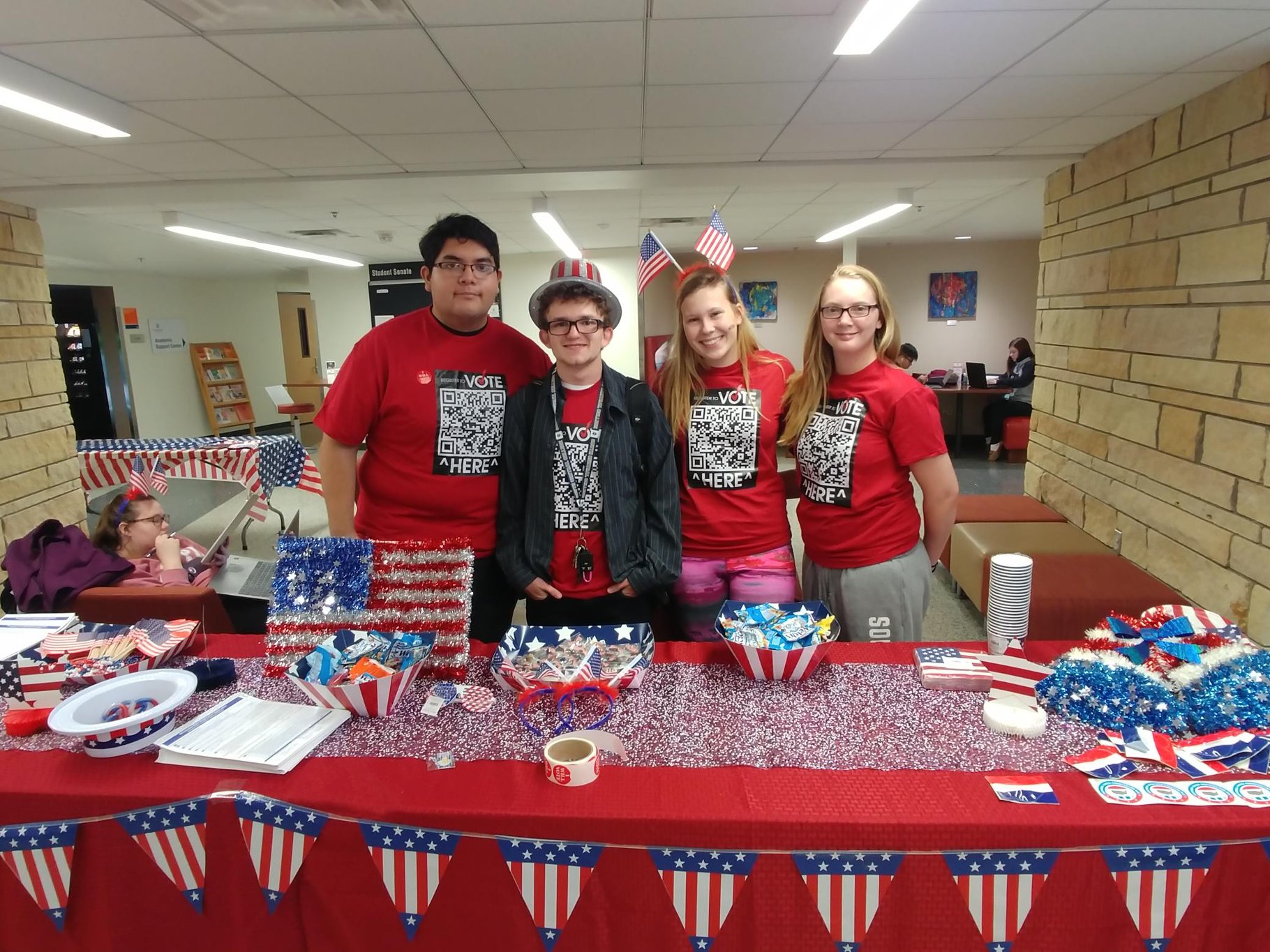 LeadMN took unprecedented steps in its GOTV efforts this year by actually making it as easy as possible for many students to vote. One of the ways LeadMN enabled students to vote was by opening up an early voting site on one of our campuses. On October 31, Ramsey county residents could vote early at Saint Paul College, facilitated by an all-student group of election judges and creating excitement and buzz around the election across campus. This initiative resulted in over 200 students voting on that day alone. To wrap up the GOTV season and hype students up for Election Day, several of our campuses held parties on or immediately before Election Day. These parties included snacks and entertainment as well as opportunities for students to find their polling places, find information about same-day registration, and research last-minute information about the candidates on their sample ballots. 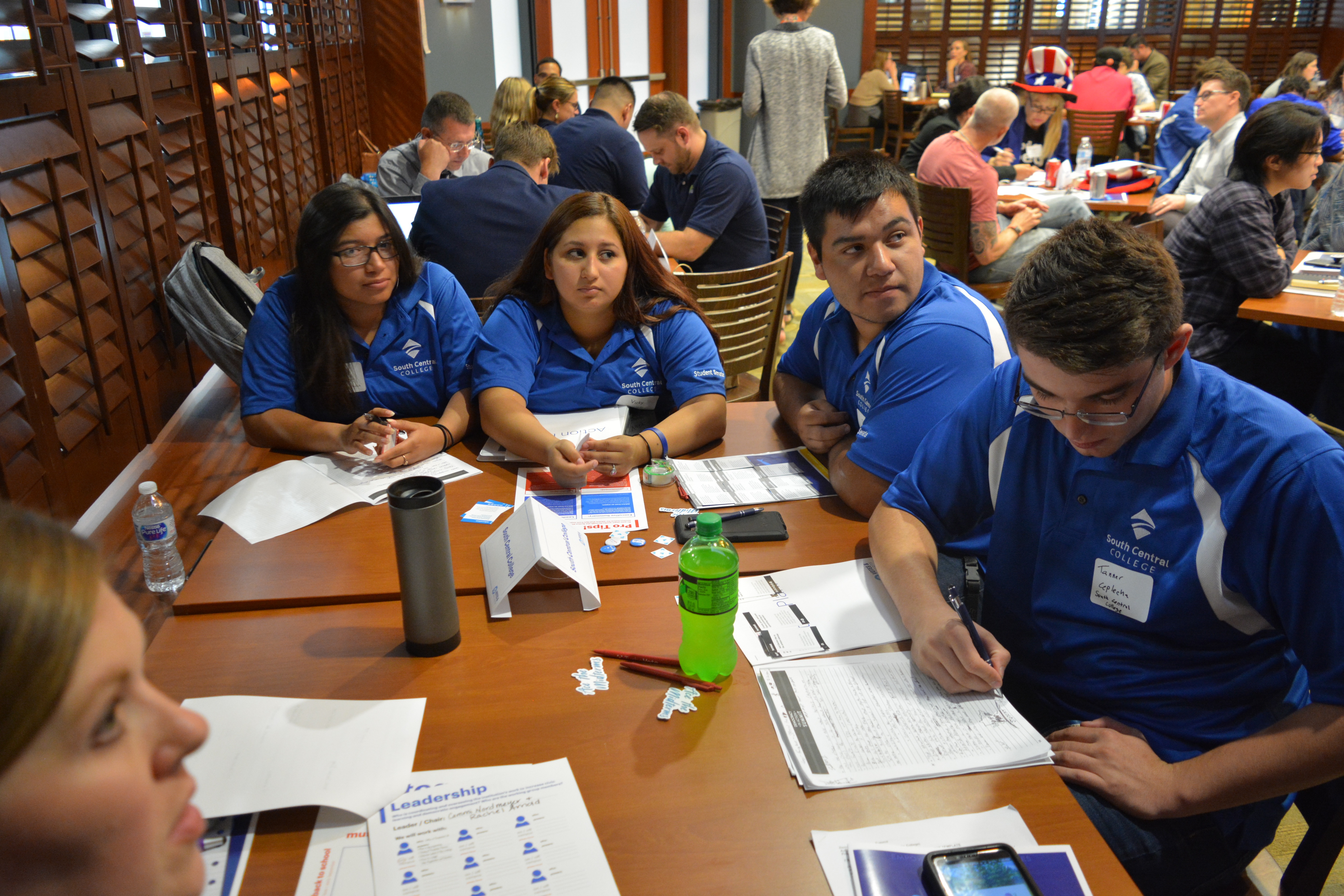 LeadMN students’ efforts in GOTV this year were unprecedented as students across the state vowed to have their voices heard in this year’s midterms. Minnesota’s overall voter turnout was at an impressive 64 percent for this year’s election, with youth voting rates in Minnesota higher than any other state in the country.

LeadMN’s voter education efforts and election events were covered throughout the election season by various TV and newspaper outlets across the state. 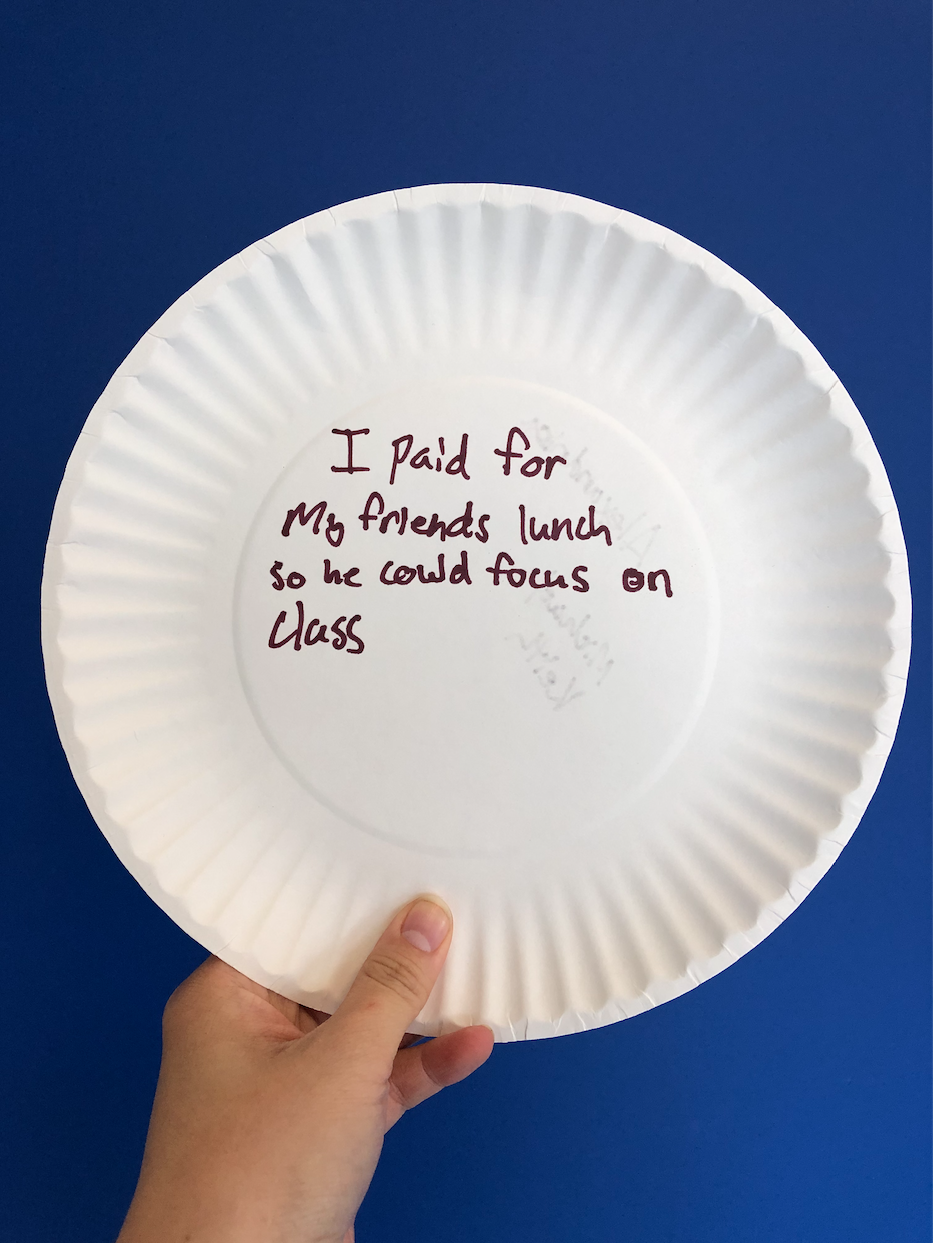 This year LeadMN students were Hungry For Change and nowhere else was it more evident than in our dedication to reduce food insecurity among college students. From the campus community and to the halls of the capitol students came together to make Hunger Free Campuses a priority. 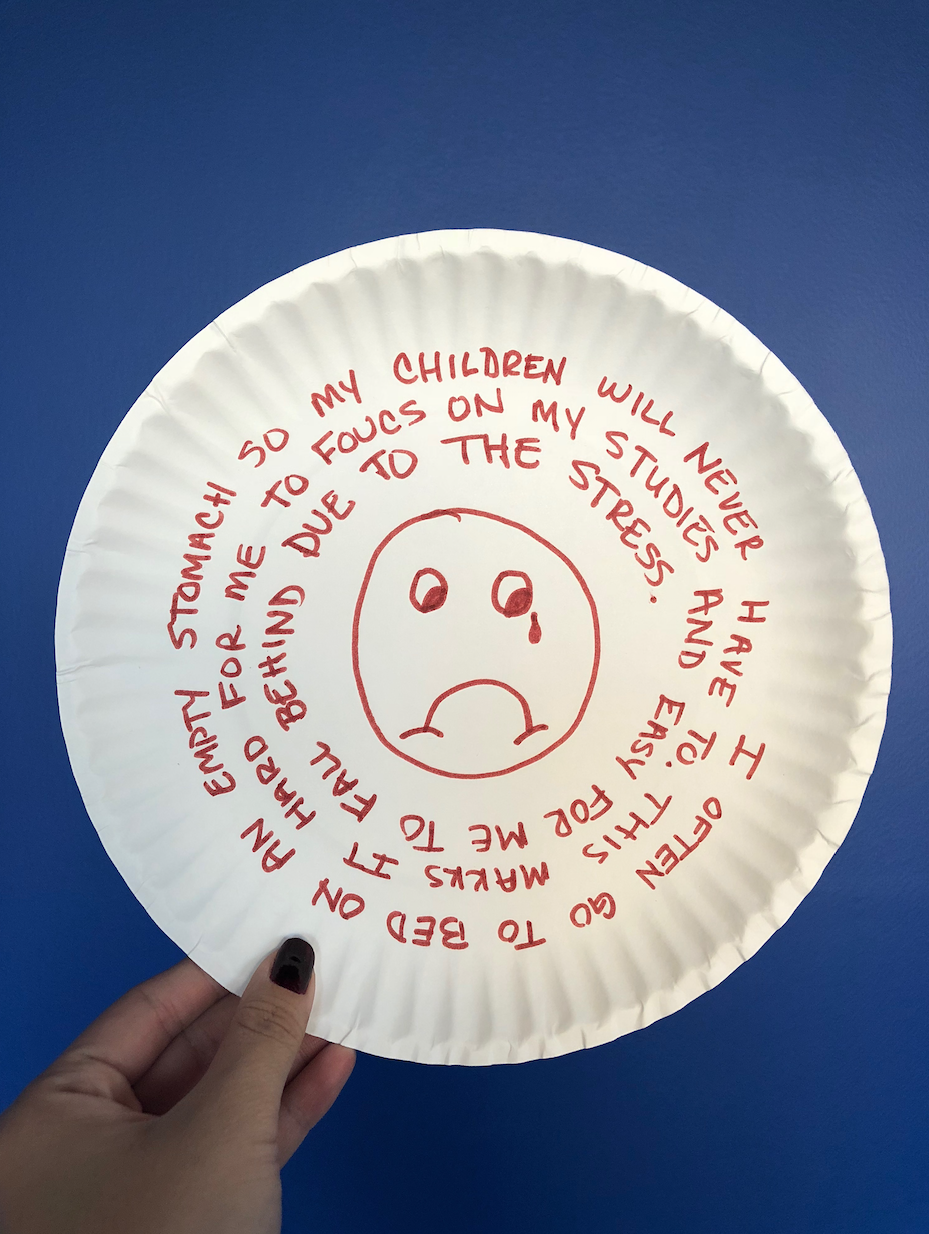 During the fall semester LeadMN focused on raising awareness about food insecurity and worked closely with students to understand the extent of food insecurity on our campuses. This work included collecting over 300 student stories to inform the identification of best practices to address food insecurity on campuses and supporting campuses in their efforts to start a food pantry. LeadMN also brought in leading anti-hunger relief organizations to increase student access to existing resources such as Supplemental Nutrition Assistance Program (SNAP). 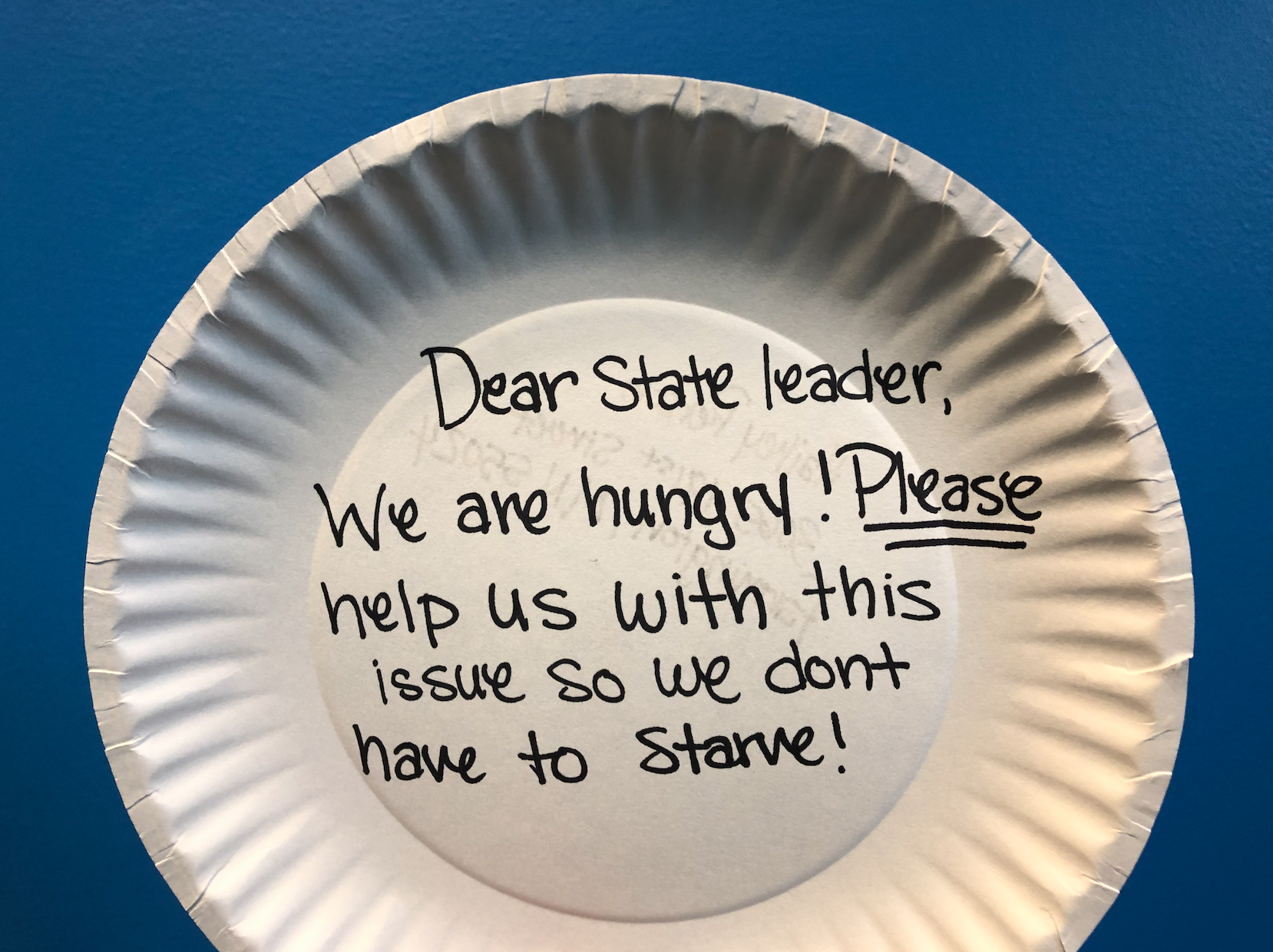 In the spring semester we geared up our advocacy efforts and focused on action. LeadMN guided 26 campus teams in the creation of their own action plans to address food insecurity at their schools. Many schools have already started enacting their plans in the form of conducting basic needs insecurity surveys, hosting food drives, and developing a campus food pantry. During this time LeadMN also introduced Hunger Free Campus Act. This legislation creates a designation for campuses and provides grant funds for colleges to work towards reducing food insecurity. Students collected and sent over 600 letters to legislators urging the support of the bill. Additionally students also participated in Hunger Day on the Hill to make addressing college food insecurity a state priority.

The commitment of LeadMN students to work towards Hunger Free Campuses has garnered tremendous local and national support and news coverage.

Addressing affordability and student success at the capitol 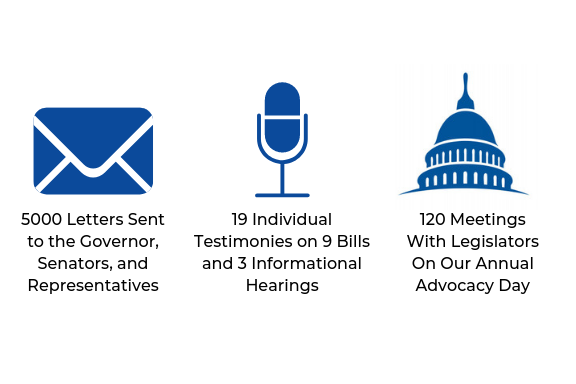 The 2019 legislative session has come to a close! As regular session wrapped up on May 20 at midnight, the higher education omnibus bill was the only budget bill to pass and be sent to the Governor.

Some of the victories for LeadMN students

As the dust settled it was clear that the advocacy efforts by LeadMN students had paid off again! Over the last couple of months, LeadMN students had been extremely busy at the state capitol meeting with legislators, testifying, and advocating for change. 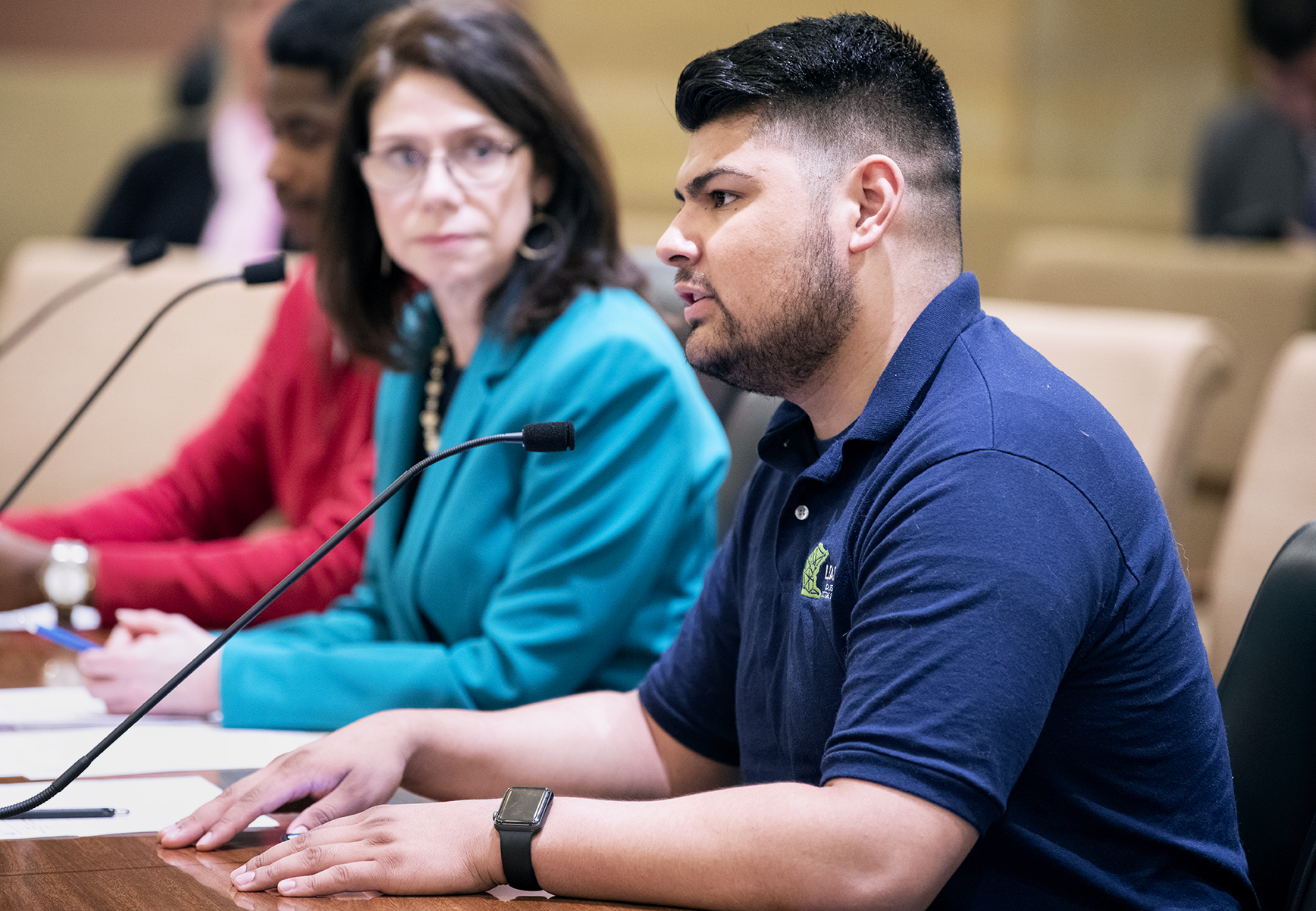 The greatest challenge our students face should be in the classroom, not at the dinner table. One of LeadMN’s top priorities this session was working to address food insecurity among students by introducing HF2366/SF2706, the Hunger Free Campus Act. The goal of this initiative is to encourage Minnesota State colleges to provide resources to address food insecurity and to raise awareness around the issue. Campuses who achieve five required criteria will be awarded a Hunger Free Campus designation by LeadMN. The passing of this designation is a major first step in addressing hunger among community and technical college students.

This session LeadMN’s years of advocacy work around Open Educational Resources paid off with the legislature providing $500,000 to create zero-textbook-cost associate degree programs (Z-Degrees) at three Minnesota State colleges by the 2020-2021 academic year. These Z-Degrees will provide tremendous cost savings in textbooks for students enrolled in those programs and remove a major barrier to student success. 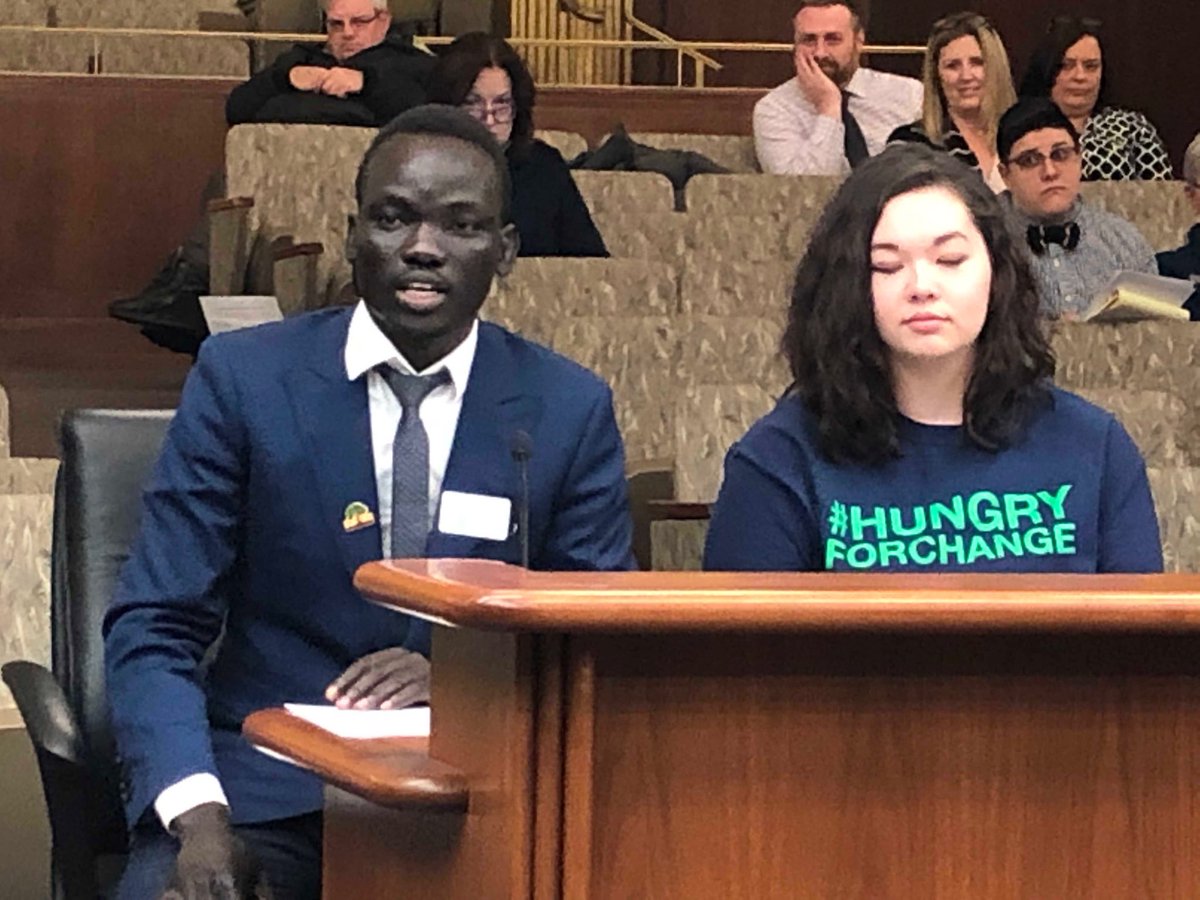 Earlier this session, LeadMN students testified in support of expanding eligibility for the workforce development scholarships to include students returning from the workforce, and to allow individuals in early childhood and transportation programs to be eligible. The program provides students with a $2500 scholarship for up to two years that can be used to help cover tuition, fees, textbooks, transportation and living expenses.

Included in the final higher education bill were the eligibility expansions to the program, along with an increase in the maximum lifetime award from $5000 to $7500. Students who transfer to a corresponding program at a Minnesota State university will also now be eligible to receive the grant for a third year. The legislature also appropriated $8 million in funding for the program over the next two years, and ongoing funding of $4 million per year. These changes along with increased funding will help further remove affordability as a barrier, increase students success, and address the critical workforce needs of Minnesota’s employers. 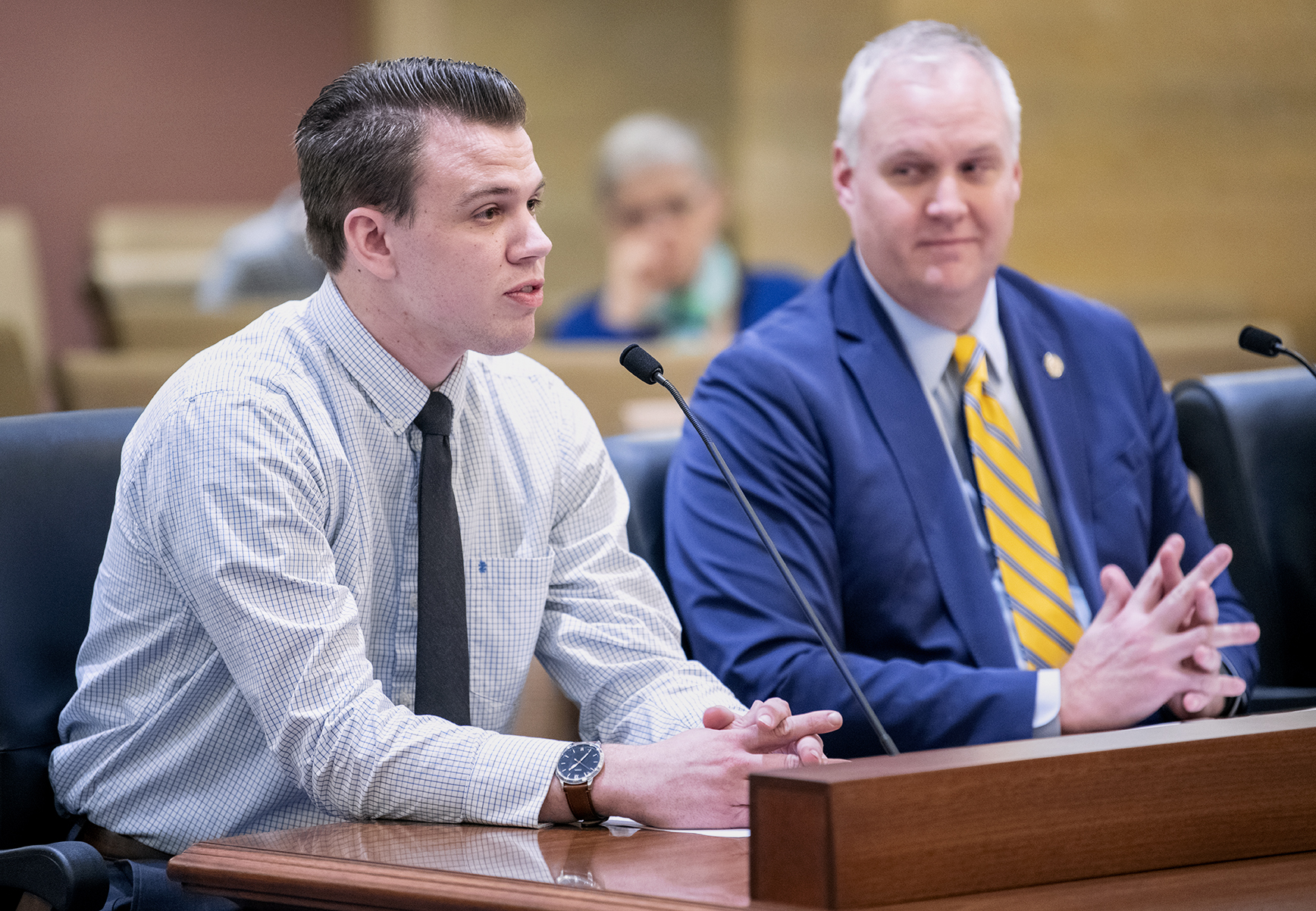 Over the last several years many states have introduced college promise programs to help drive down the cost of college. This session LeadMN joined in a coalition to introduce SF1308, the Minnesota College Promise. This new grant would cover the first two years of tuition, fees, and textbooks at any public college or university. This bill was heard on March 14 and March 28 in the Senate Higher Education Finance and Policy Committee.

While the Minnesota College Promise did not make it into the final higher education omnibus bill, the MN Reconnect program was established in state statute and provided with $2 million in funding. This program, similar to the Tennessee Reconnect program, will help returning adult learners with at least fifteen credits, but no degree or certificate, received specialized support and a grant up to $1000 to help cover the cost of attendance after other scholarships and grant aid has been applied.

For years students at LeadMN have asked why online tuition costs more than similar on-campus courses, and this session the legislature began asking the same question. After significant debate around the issue, the legislature decided to freeze online tuition rates, and require Minnesota State to provide a plan on how they will equalize the cost of online courses and similar on-campus courses. For our students who take on online courses, this freeze will help keep college affordable during the 2020-2021 academic year.

If you have any questions about this legislative session and how LeadMN was involved, contact LeadMN Director of Government Relations Matt Gutsch at mgutsch@leadmn.org. 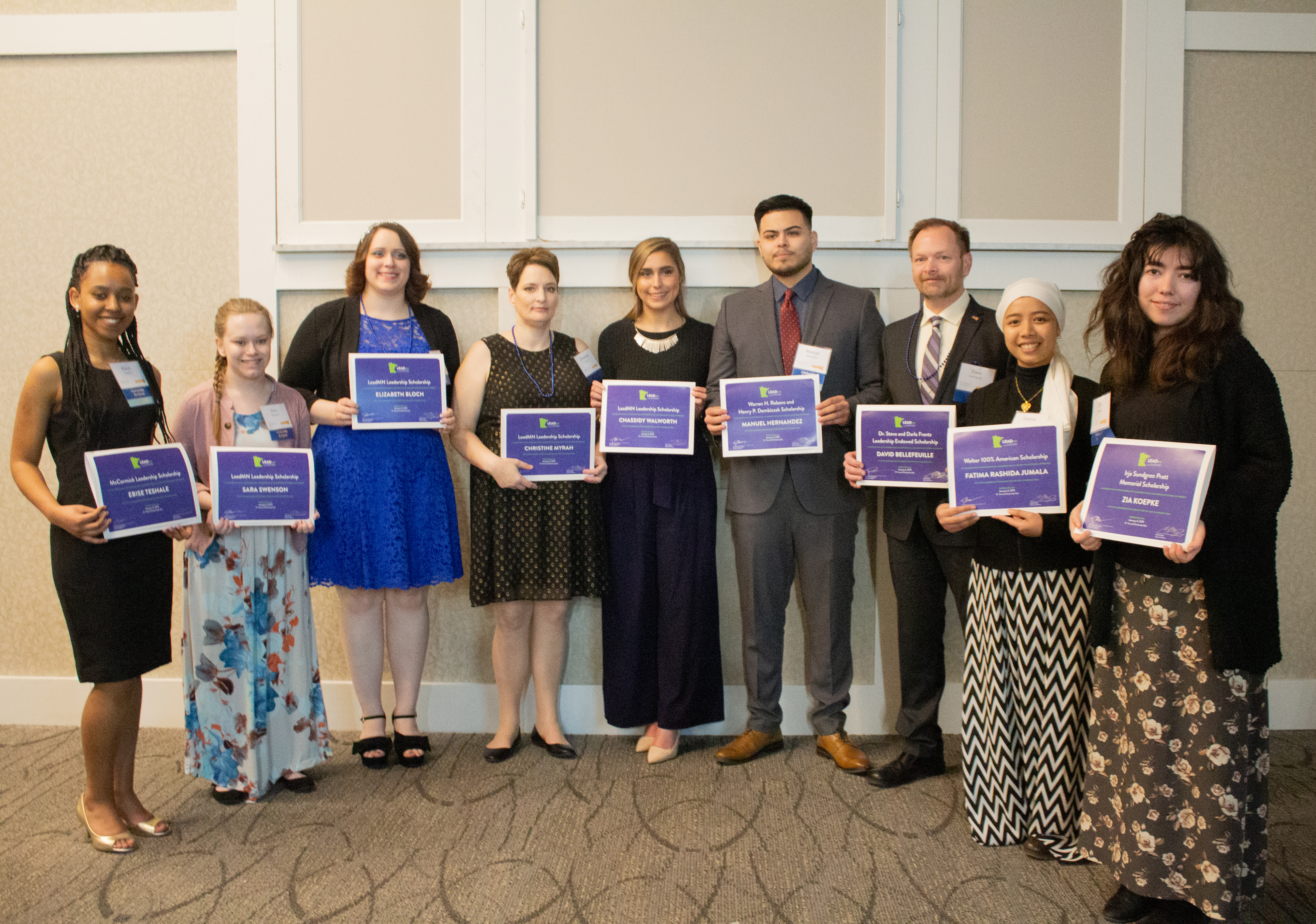 Over 350 people gathered in Brooklyn Center on Friday, January 4, to recognize and celebrate student leaders from all across Minnesota at the 12th Annual Scholarship Gala. Thanks to our generous donors, 24 scholarship recipients were recognized for their leadership and hard work. Throughout the night we were able to raise $15,000 for student scholarships.

A special thank you to all of our generous donors! 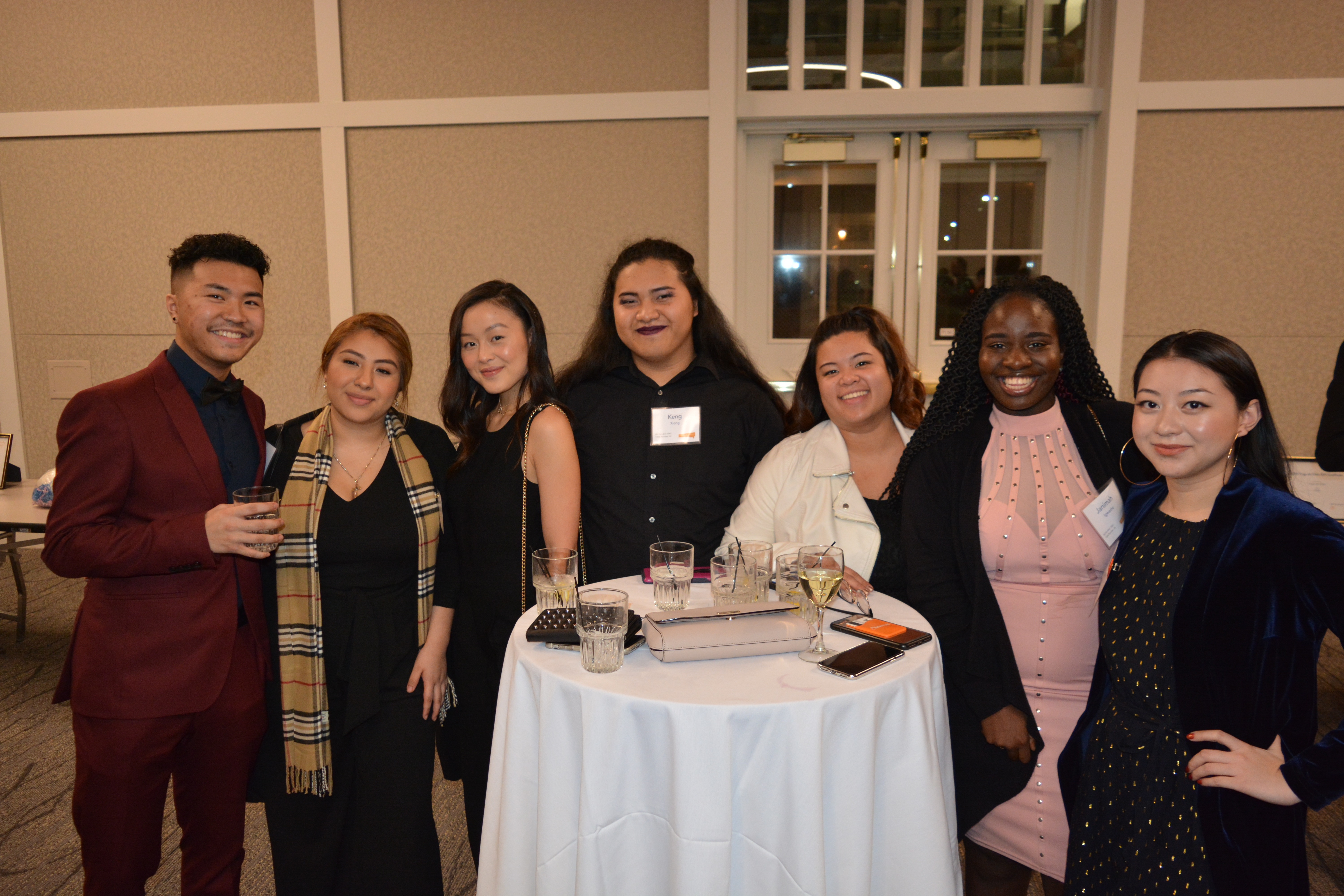 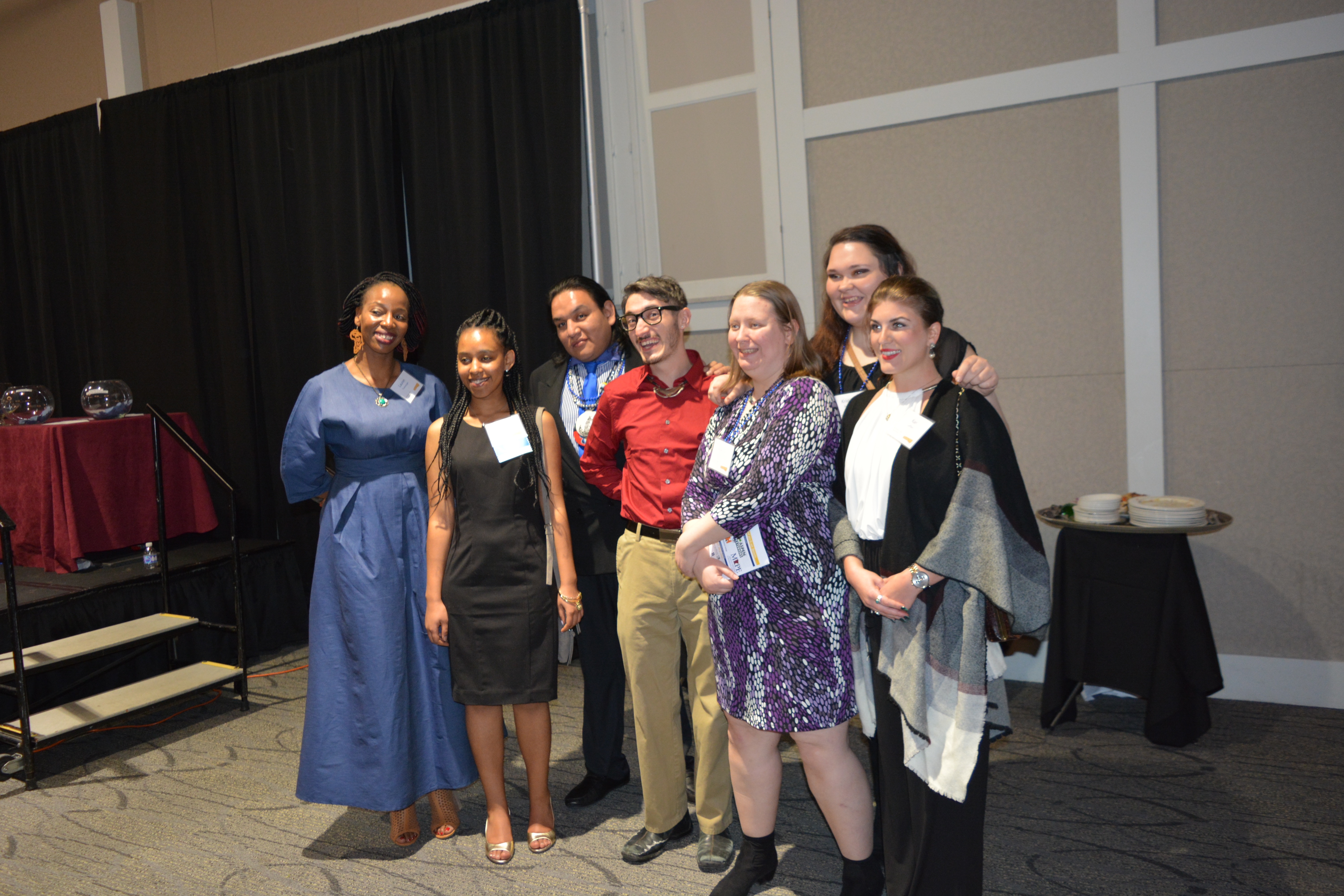 Join us next year for the 13th Annual Scholarship Gala on Friday, January 10, 2020, once again being held at the Earle Brown Heritage Center!