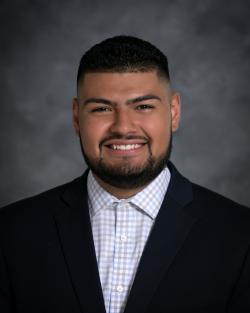 Frankie Becerra did his general education at Century College from 2016-2019. While there he discovered a passion for civic engagement and empowering Latinx students. He became the president of the Latinx student advocacy group, Movimiento Latino, and Director of Legislature of his college’s student senate. He would go on to focus on keeping D.A.C.A and involving B.I.P.O.C. communities in civic action.

He wanted to ensure that students voices were heard not only on his campus but around the state of Minnesota. This led him to work as an Equity and Inclusion Intern at LeadMN, where he continued his D.A.C.A work and continued to educate himself on student issues across all two-year colleges in the state. Through this experience, he took on active leadership role within LeadMN and shortly after his term ended, he transferred to Metropolitan State University.

His “I LeadMN” statement was “I LeadMN because change cannot wait for me to graduate”. After seeing the continued social injustices that have occurred in the first half of 2020, he felt like he needed to uphold that statement. He hopes to leverage his previous experience and his rejuvenated passion for civic engagement to build up communities and have their voices heard through civic action.